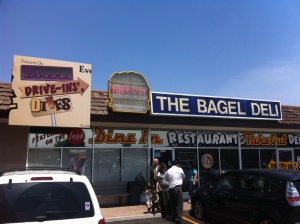 I’m a big fan of the show Diners, Drive-ins and Dives (Triple D).  In fact, I’ve started searching out places where the host Guy Fieri has visited.  Yea, pretty nerdy, I know.  Whatever.  I take my food pretty serious.

Tomorrow is my birthday, so when Mrs. Turkey Sandwich asked me where I wanted to go for my birthday dinner, I checked the innerettes to see if there was a place in Denver that has been featured on  “Triple D” that I have not been to yet.

There was.  It’s called The Bagel Deli and it’s a couple miles from my house.  It’s a Jewish Deli and with that, my decision was made.

Typically when I visit one of the places featured on Triple D, I order what Guy ate on the show.  Since I was celebrating MY birthday, I was considering the Pastrami and Turkey Sandwich.  Before I made the commitment, I asked the waitress if the Turkey was real.  I had reason to believe it was because the menu prominently said “as authentic as it gets” but I stil wanted a confirmation.  Her response was “well, yeah, they slice it”.  That wasn’t really the response I was looking for, but the waitress made me kind of nervous and I could tell she wanted me to hurry up and make a decision.

The final assessment: no it’s not real Turkey.  It’s processed.  The Pastrami was strong, but the Turkey was weak.  Bagel Deli: I think you might be stretching the truth by saying “authentic as it gets” – at least when it comes to Turkey Sandwiches.

I'm Neal. I love Turkey Sandwiches. In fact, I love them so much that I've been blogging about them since you were in diapers. I've forgotten more about Turkey Sandwiches than you've ever known.